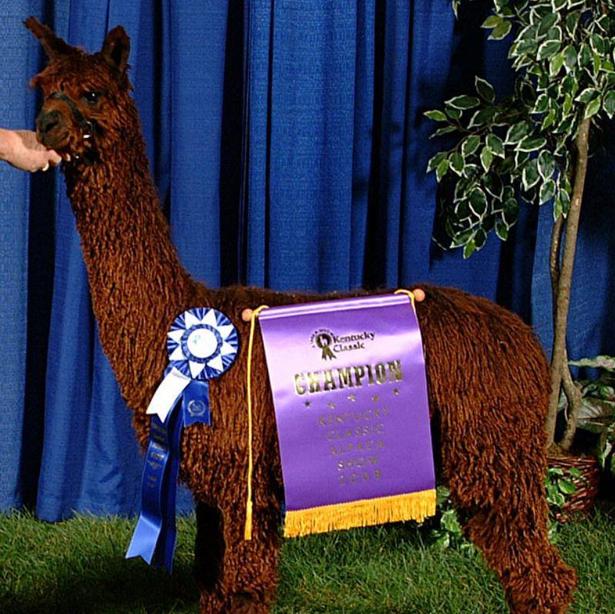 Sierra Bonita’s MacGyver’s Millie is an exceptional, one of a kind MacGyver daughter. When we say one of a kind, that is just what we mean. Her dam, Myia Shastia tragically passed away when Millie was a cria. Millie’s Grand sires and grand dams are also deceased. Millie’s heritage is also impressive coming from the Accoyo lines of Bruxo, Inca, and Uribe. Her dam, Myia Shastia, won 3 championships including the 2005 AAA Futurity, GWAS in Denver and AOBA 2005 National Conference. Her sire, MacGyver has won “Suri Herd Sire of the Year” and “Dark Suri Herd Sire of the Year” for 7 consecutive years. We knew Millie would be a champion the day she was born. She had that corded skin throughout her body which is a true indicator of extreme density. She has the luster and the conformation you would expect of a champion. Millie is a true Champion. She was only shown as a juvenile but won 5 color championships and the blue ribbon at the 2008 Futurity. She was shorn at 11 months and her dark brown, Maroon, fleece won 1st place, reserve champion and best suri lock at the Suri Network’s All Suri Fleece Show, the largest fleece show in the country. Millie is proven with no birthing problems and is a wonderful mother to her top show quality ¾ Accoyo brown cria, Beloveds Parable. She is gorgeous, full Peruvian and ½ Accoyo. There will never be another MacGyver’s Millie.